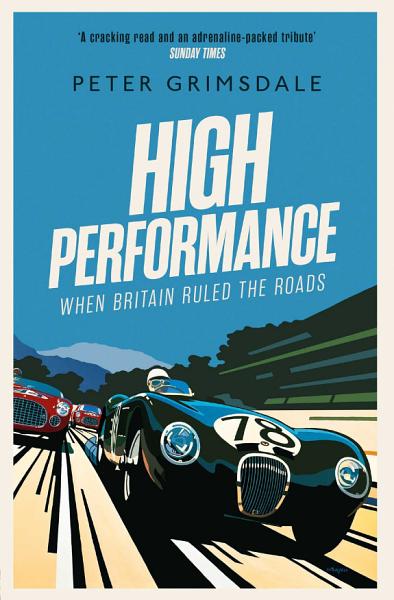 ‘A band of stubborn pioneers rose from the embers of Britain’s cities after World War Two and created the finest automobiles the world had ever seen ... High Performance tells the exhilarating tale of their journey down the fast lane.’ Ben Collins, bestselling author of The Man In The White Suit and How To Drive ‘A wonderful glimpse "backstage" at the flamboyant mavericks and crazies who populated the British motor industry in the 60s.’ Alexei Sayle ‘High Performance is a cracking read and an adrenaline-packed tribute to the time when British mavericks “blew the bloody doors off” the competition.’ The Sunday Times 'Peter Grimsdale gives a very different and uplifting slant to the story of ... the post-Second World War British Motor industry. He focuses on people who did things differently and whose achievements are with us still ... thoughtful and stimulating.' Alan Judd, The Oldie Chosen as one of The Mail on Sunday’s ‘100 Summer Books’? In January 1964 a team of tiny red and white Mini Coopers stunned the world by winning the legendary Monte Carlo Rally. It was a stellar year for British cars that culminated in Goldfinger breaking box office records and making James Bond’s Aston Martin DB5 the world’s most famous sports car. By the sixties, on road, track and silver screen the Brits were the ones to beat, winning championships and capturing hearts. Stirling Moss, Jim Clark and Paddy Hopkirk were household names who drove the sexiest and most innovative cars. Designers like John Cooper, and Colin Chapman of Lotus, dismissed as mere ‘garagisti’ by Enzo Ferrari, blew the doors off Formula One and grabbed all the prizes, while Alex Issigonis won a knighthood for his revolutionary Mini. The E Type Jaguar was feted as the world’s sexiest car and Land Rover the most durable. But before the Second World War only one British car had triumphed in a Grand Prix; Britain’s car builders were fiercely risk-averse. So what changed? To find out, Peter Grimsdale has gone in search of a generation of rebel creative spirits who emerged from railway arches and Nissen huts to tear up the rulebook with their revolutionary machines. Like the serial fugitives from the POW camps, they thrived on adversity, improvisation and sheer obstinate determination. Blazing the trail for them was William Lyons, whose heart-stoppingly glamorous and uncompromising Jaguars propelled a bruised and bankrupt nation out of the shadows of war, winning the fans in Hollywood and beating ‘those bloody red cars’ at Le Mans. High Performance celebrates Britain’s automotive golden age and the mavericks who sketched them on the back of envelopes and garage floors, who fettled, bolted and welded them together and hammered the competition in the showroom, on the road and on the track – fuelled by contempt for convention.

Authors: Peter Grimsdale
Categories: Biography & Autobiography
Type: BOOK - Published: 2019-05-16 - Publisher: Simon and Schuster
‘A band of stubborn pioneers rose from the embers of Britain’s cities after World War Two and created the finest automobiles the world had ever seen ... High Performance tells the exhilarating tale of their journey down the fast lane.’ Ben Collins, bestselling author of The Man In The White

Racing in the Dark

Authors: Peter Grimsdale
Categories: Sports & Recreation
Type: BOOK - Published: 2021-06-10 - Publisher: Simon and Schuster
'Glorious...gripping and sometimes tragic' Robbie Coltrane The inspirational story of the Bentley Boys and Le Mans – the race they made their own. Le Mans, 1927. W.O. Bentley peered into the dusk. His three cars, which had led from the start, were missing. Two years running he had failed to

Authors: Peter Grimsdale
Categories: Sports & Recreation
Type: BOOK - Published: 2021-06-10 - Publisher:
The inspirational story of the Bentley Boys and Le Mans - the race they made their own.

Authors: David B. Reynolds
Categories: Political Science
Type: BOOK - Published: 2002 - Publisher: M.E. Sharpe
This work examines the continued reality of social democracy in Europe and what lessons can be learned for the US. It shows how progressive economic change is already being fought for by labour and community groups throughout America in such efforts as the Living Wage Movement.

The A-Z of popular Scooters & Microcars

Authors: Mike Dan
Categories: Transportation
Type: BOOK - Published: 2015-08-24 - Publisher: Veloce Publishing Ltd
This is mainly a photographic reference book to classic scooters and microcars with specification data presented in A to Z order of manufacturer. There are also nostalgic recollections by the author based on ownership and personal experience. In the middle 1950s as a teenager Mike Dan became interested in these

Authors: Great Britain: Department for Transport, Great Britain: Department for Transport Staff
Categories: Business & Economics
Type: BOOK - Published: 2012-01-10 - Publisher: The Stationery Office
High speed rail is already being constructed or been used in many nations. Britain's exile from this would mean losing out to global competitors. The long term option in investing in high speed rail would transform and allow Britain to compete globally and for national economic prosperity. Such investment in