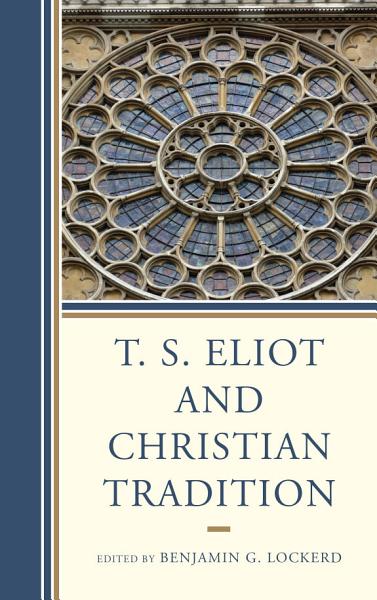 T. S. Eliot was raised in the Unitarian faith of his family in St. Louis but drifted away from their beliefs while studying philosophy, mysticism, and anthropology at Harvard. During a year in Paris, he became involved with a group of Catholic writers and subsequently went through a gradual conversion to Catholic Christianity. Many studies of Eliot's writings have mentioned his religious beliefs, but most have failed to give the topic due weight, and many have misunderstood or misrepresented his faith. More recently, scholars have begun exploring this dimension of Eliot's thought more carefully and fully. In this book readers will find Eliot's Anglo-Catholicism accurately defined and thoughtfully considered. Essays illuminate the all-important influence of the French Catholic writers he came to know in Paris. Prominent among them were those who wrote for or were otherwise associated with the Nouvelle Revue Française, including André Gide, Paul Claudel, and Charles-Louis Philippe. Also active in Paris at that time was the notorious Charles Maurras, whose influence on Eliot has been exaggerated by those who wished to discredit Eliot's traditionalist views. A more measured assessment of Maurras's influence has been needed and is found in several essays here. A wiser French Catholic writer, Jacques Maritain, has been largely ignored by Eliot scholars, but his influence is now given due consideration. The keynote of Eliot's cultural and political writings is his belief that religion and culture are integrally related. Several contributors examine his ideas on this subject, placing them in the context of Maritain's ideas, as well as those of the Catholic historian Christopher Dawson. Contributors take account of Eliot's intellectual relationship with such figures as John Henry Newman, Charles Williams, and the expert on church architecture, W. R. Lethaby. Eliot's engagement with other contemporaries who held a variety of Christian beliefs—including George Santayana, Paul Elmer More, C. S. Lewis, and David Jones—is also explored. This collection presents the subject of Eliot's religious beliefs in rich detail, from a number of different perspectives, giving readers the opportunity to see the topic in its complexity and fullness.

Authors: Benjamin G. Lockerd
Categories: Literary Criticism
Type: BOOK - Published: 2014-06-18 - Publisher: Rowman & Littlefield
T. S. Eliot was raised in the Unitarian faith of his family in St. Louis but drifted away from their beliefs while studying philosophy, mysticism, and anthropology at Harvard. During a year in Paris, he became involved with a group of Catholic writers and subsequently went through a gradual conversion

Authors: Benjamin G. Lockerd
Categories: Literary Collections
Type: BOOK - Published: 2016-03-01 - Publisher:
Eliot surprised his brother during a visit to Rome in 1926, when he fell to his knees at St. Peter's, and he surprised his Bloomsbury friends a year later when he was received into the Church of England. Many studies of Eliot's writings have mentioned his religious beliefs, but often

The Search for Coherence

The Relation of T. S. Eliot to the Christian Tradition

Authors: John D. Morgenstern, Joseph Litts
Categories: Literary Criticism
Type: BOOK - Published: 2017 - Publisher: Oxford University Press
The T. S. Eliot Studies Annual strives to be the leading venue for the critical reassessment of Eliot's life and work in light of the ongoing publication of his letters, critical volumes of his complete prose, the new edition of his complete poems, and the forthcoming critical edition of his

Authors: Michael Bell, Scott Freer
Categories: Religion
Type: BOOK - Published: 2016-08-17 - Publisher: Cambridge Scholars Publishing
T.S. Eliot was arguably the most important poet of the twentieth century. Nonetheless, there remains much scope for reconsidering the content, form and expressive nature of Eliot’s religious poetry, and this edited collection pays particular attention to the multivalent spiritual dimensions of his popular poems, such as ‘The Lovesong of

Authors: Joanna Rzepa
Categories: Literary Criticism
Type: BOOK - Published: 2021-04-21 - Publisher: Springer Nature
This is the first book-length study to examine the interface between literary and theological modernisms. It provides a comprehensive account of literary responses to the modernist crisis in Christian theology from a transnational and interdenominational perspective. It offers a cultural history of the period, considering a wide range of literary

Modern Poetry and the Christian Tradition

Authors: Amos N. Wilder
Categories: Religion
Type: BOOK - Published: 2014-04-08 - Publisher: Wipf and Stock Publishers
In Modern Poetry and the Christian Tradition, Wildler examines this movement in poetry in relation to the direction in which our culture is moving. He interprets the significance of modern poetry and shows its relation to the "traditional." He gives attention to the representative poets of our time (including Dylan