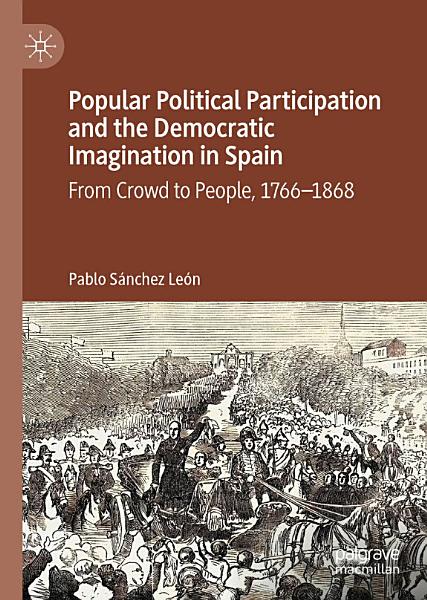 This book addresses the changing relationships among political participation, political representation, and popular mobilization in Spain from the 1766 protest in Madrid against the early Bourbon reforms until the citizen revolution of 1868 that first introduced universal suffrage and led to the ousting of the monarchy. Popular Participation and the Democratic Imagination in Spain shows that a notion of the “crowd” internally dividing the concept of “people” existed before the advent of Liberalism, allowing for the enduring subordination of popular participation to representation in politics. In its wider European and colonial American context, the study analyzes semantic changes in a range of cultural spheres, from parliamentary debate to historical narrative and aesthetics. It shows how Liberalism had trouble reproducing the legitimacy of limited suffrage and traces the evolution of an imagination on democracy that would allow for the reconfiguration of an all-encompassing image of the people eventually overcoming representative government. “Focused on the nation and identities, Spanish historiography had a pending debt with that other historical subject of modernity, the people. With this book, Pablo Sánchez León starts cancelling the debt with an innovative methodology combining conceptual history with social and political history. Brilliantly, this books also proposes a novel chronology for modern history and renewed categories of analysis. In many senses, this is an extraordinarily renovating senior work.” —José María Portillo Valdés, University of the Basque Country, Spain “This book by Pablo Sánchez León is an original and detailed study of one of the essential components of modernity, the relation between the concepts of plebe and pueblo. The author shows that plebe and people were shaped in a process of mutual differentiation and how the enduring tension between them deeply marked out the evolution of Spanish politics from the end of the Old Regime and throughout the 19th century. As the author brilliantly argues, such tension is tightly imbricated with the enduring dilemma between representation and participation underlying modern political systems. Through a historical analysis of the influence of people and plebe over Spanish, the book makes clear the degree to which the power of language contributes to shape political actors and institutional frames.” —Miguel Ángel Cabrera — Professor, University of La Laguna, Tenerife, Spain “Most accounts of Spain’s transition to modern democracy begin with the popular uprising against the French invasion in 1808, the creation of a national parliament and the promulgation of an advanced Liberal constitution in 1812. Pablo Sánchez León begins the story half a century earlier in the mass street protests in Madrid and other cities in 1766 sparked by Charles III’s sweeping reform programme. Sánchez León focuses unrepentantly on plebeian groups and crowd action – how they are described and conceived by contemporaries – as a key to understanding Spain’s precocious and troubled passage from absolutism to the promulgation of universal male suffrage in September 1868. This audacious and highly original interpretation will surely strike a chord with students of modern Spain.” —Guy Thomson, University of Warwick, UK “This is a book for exploring (from current needs) the history of political participation in Spanish society in order to rethink the very notion of modern citizenship.” —María Sierra, University of Seville, Spain “Motivated by the current crisis in political representation in parliamentary democracies, this work by Pablo Sánchez León departs from the process of construction of modern citizenship. Representation, participation and mobilization are put into play as an interactive triad whose dynamics and changing conceptualization have the key to the social, political and cultural changes between the Old Regime and the early establishment of democracy in 1868. The “They do not represent us!” and other current claims for deliberative democracy provide the guiding thread for a demanding research on the tension between representation and participation shaping the period 1766-1868. The work reflects on the relevance of popular participation and, in presenting the modern history of Spain as singular and relevant on its own, provides an account of the building of modern citizenship. —Pablo Fernández Albaladejo, Autonomous University of Madrid, Spain This exciting book is both topical and historiographically valuable. It offers a fresh perspective on current debates about the limits of representation and the pros and cons of participation; it makes Spanish political culture in the age of revolutions accessible to anglophone readers, and it engagingly illustrates one way of doing the ‘history of concepts’. Recommended on all three counts. Joanna Innes, Oxford University

Popular Political Participation and the Democratic Imagination in Spain

Authors: Pablo Sánchez León
Categories: History
Type: BOOK - Published: 2020-11-27 - Publisher: Springer Nature
This book addresses the changing relationships among political participation, political representation, and popular mobilization in Spain from the 1766 protest in Madrid against the early Bourbon reforms until the citizen revolution of 1868 that first introduced universal suffrage and led to the ousting of the monarchy. Popular Participation and the

Authors: Alan Sears, James Cairns
Categories: Political Science
Type: BOOK - Published: 2012-10-15 - Publisher: University of Toronto Press
Democracy is very much an open question in the early twenty-first century. While voter participation declines in many traditional democracies, new movements for democracy are emerging around the world. This book brings the question of democracy out of the halls of political power and home to our daily lives, pitting

Popular Political Participation and the Democratic Imagination in Spain

Authors: Pablo Sánchez León
Categories: History
Type: BOOK - Published: 2021-12-12 - Publisher: Palgrave Macmillan
This book addresses the changing relationships among political participation, political representation, and popular mobilization in Spain from the 1766 protest in Madrid against the early Bourbon reforms until the citizen revolution of 1868 that first introduced universal suffrage and led to the ousting of the monarchy. Popular Participation and the

Authors: Andrew J. Perrin
Categories: Social Science
Type: BOOK - Published: 2009-10-15 - Publisher: University of Chicago Press
When we think about what constitutes being a good citizen, routine activities like voting, letter writing, and paying attention to the news spring to mind. But in Citizen Speak, Andrew J. Perrin argues that these activities are only a small part of democratic citizenship—a standard of citizenship that requires creative

The Democratic Imagination in America

Authors: Russell L. Hanson
Categories: Philosophy
Type: BOOK - Published: 2014-07-14 - Publisher: Princeton University Press
Russell Hanson discovers in the history of democratic rhetoric in the United States a series of essential contests" over the meaning of democracy that have occurred in periods of political and socio-economic change. Originally published in 1985. The Princeton Legacy Library uses the latest print-on-demand technology to again make available

Authors: Louis Filler
Categories: Social Science
Type: BOOK - Published: 2017-07-12 - Publisher: Routledge
This festschrift celebrates the accomplishments of renowned social scientist Irving Louis Horowitz as he turned sixty-five. Since Horowitz's views were global and his discourse was never restricted to national boundaries, the volume includes contributions from across the globe. Collectively, the book represents a personal as well as an intellectual statement

The Democratic Imagination in America

The Silence Of The Democratic Imagination

Lifelong Learning and the Democratic Imagination

Authors: Peter Willis, Pam Carden
Categories: Adult education
Type: BOOK - Published: 2004 - Publisher:
LIFELONG LEARNING AND THE DEMOCRATIC IMAGINATION is a collection of essays from Adult and Community Educators in Australia, New Zealand, England, Scotland, Canada, America and South Africa. There is a general belief here that democracy is about people consciously sharing power and that such deliberate choices to share power, draw